Antonia Hodgson is the author of the bestselling Thomas Hawkins series, which is set in the 1720s. Her debut, The Devil In The Marshalsea, won the CWA Historical Dagger in 2014. She has also been shortlisted for the Theakston’s Crime Novel of the Year, and her books have been chosen for both the Richard & Judy and Waterstones’ book clubs. Antonia was born and grew up in Derby, and lives in London. She is on Twitter under the imaginative profile name @antoniahodgson

MJ (Miranda) Carter, journalist and historian, turned to thriller-writing because it was so much fun making stuff up. She’s written three historical novels set in the 1840s; the first, The Strangler Vine, and the third, The Devil’s Feast, were shortlisted for the Crime Writer’s Association Daggers awards. Anthony Blunt: His Lives, her biography of the Cambridge spy, was shortlisted for the non-fiction Dagger, and chosen by the New York Times as one of the best books of 2002.

She never quite shook off her love of old things, however, and today she works part time for Britain’s most venerable heritage body, The Society for the Protection of Ancient Buildings, fondly known as SPAB.

SPAB’s head office is a Georgian building in Spitalfields in the East End of London, an area that inspires her books. Kate’s maternal family lived in London’s Limehouse at the end of the 19th century and this is setting for her Kitty Peck novels. Her first book, Kitty Peck And The Music Hall Murders (winner of the Stylist Magazine / Faber and Faber crime fiction writing competition) was published in July 2013 and was shortlisted for the prestigious Crime Writers’ Association Historical Dagger Award.

Kate lives in St Albans (in a very dusty house) with her husband Stephen. When she isn’t writing – wearing a pair of fleecy pyjamas for added comfort – she likes buying shoes. Lots of shoes.

You might not always read them in the loo, but a lot of humour books end up in the toilet. Author and journalist Louis Barfe talks to Jason Hazeley, comedy writer and co-author of the Ladybird books for adults; Tom Jackson, the man behind the Postcards From the Past book, Twitter account and podcast; and Phil Norman, author of Closet Reading: 500 Years of Humour on the Loo, about the enduring appeal of humour books. 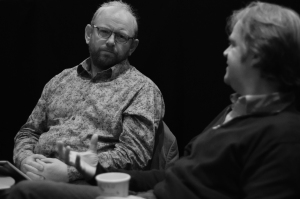 Louis Barfe is an internationally recognised expert on all aspects of the entertainment industry. On publication of his first book, Where Have All The Good Times Gone?,Record Collector magazine called him “the man who knows everything”. He is also the author of Turned Out Nice Again, a history of British light entertainment, an acclaimed biography of Les Dawson, and is currently working on another major British showbusiness biography.

In between writing books, Barfe has worked extensively as a journalist, writing radio reviews for the New Statesman and The Lady, features for The Oldie, Radio Times, Sunday Telegraph, and book reviews for the Independent on Sunday. His meticulous show business features appear regularly in the Sunday Express.

Jason Hazeley With Joel Morris, Jason is the co-writer of most of the things you like, including the multi-million selling Ladybird Books for grown-ups and the Framley Examiner books. Recent TV work includes the Philhomena Cunk On Britain series and Charlie Brooker’s Screenwipe; the duo have also written for David Walliams, Kevin Eldon, Miranda Hart, Omid Djalili, Mitchell and Webb, Armstrong and Miller and Peter Serafinowicz. On radio, their work includes Adendum, Angstrom, Flight of the Conchords and last Christmas, they presented Are You Alright In There?, a history of the Christmas toilet book, for Radio 4.

Tom Jackson is the author of the 4th Estate book Postcard From The Past, which developed from the Twitter account @pastpostcard, which has around 60k followers and attracts over 6 million impressions a month. He has written about postcards for the Guardian, The Telegraph, Big Issue and Picture Postcard Monthly. He has produced documentaries for Radio 4 including Postcards From The White City and A Tale of Two Emirates. Tom presents Podcast From The Past, in which he chats to guests about postcards and their lives. Many years ago, Tom went to school in Croydon.

3pm
John Otway On The Route To 66 Buy Tickets Here

John Otway achieved a degree of what he calls micro-stardom in 1977 at the height of punk rock with Cor Baby That’s Really Free after landing painfully on an amplifier during the BBC’s Old Grey Whistle Test. But he was destined to be remembered as a one-hit wonder until becoming ‘Rock And Roll’s Greatest Failure’ – when he sold out the Royal Albert Hall, had a second hit and premiered his movie at the Odeon Leicester Square. Now he’s coming to Croydon boasting, “Cor baby, I’m an OAP on the route to 66.” 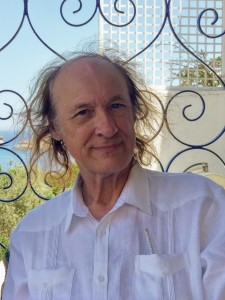 John Otway achieved a degree of what he calls micro-stardom in 1977 at the height of punk. During an appearance on BBCs Old Grey Whistle Test he attempted to do some elegant gymnastics – but landed painfully astride a amplifier. Following this appearance he was rewarded with a hit record: Cor Baby That’s Really Free.

However despite his record company giving him outrageous amounts of money, he was unable to follow it up and would have probably been destined to be remembered as an obscure one-hit wonder had he not decided to capitalise on his lack of success by selling himself as ‘Rock and Roll’s Greatest Failure’.

This interesting career direction enabled John to sell  out the Royal Albert Hall, have another hit 25 years after the first one, and premier his movie at the Odeon Leicester Square. Although he has reached a pensionable age (last year he boasted “Cor baby, I’m an OAP”), he’s still entertaining and this year he is “On The Route To 66”.

Zak Jane Keir has been a writer and editor specialising in erotica for over 20 years. She has published several novels and short stories, and edited a variety of anthologies. She believes in encouraging writers and would-be writers of erotica to let their imaginations run riot.

Back to ‘what’s On page’